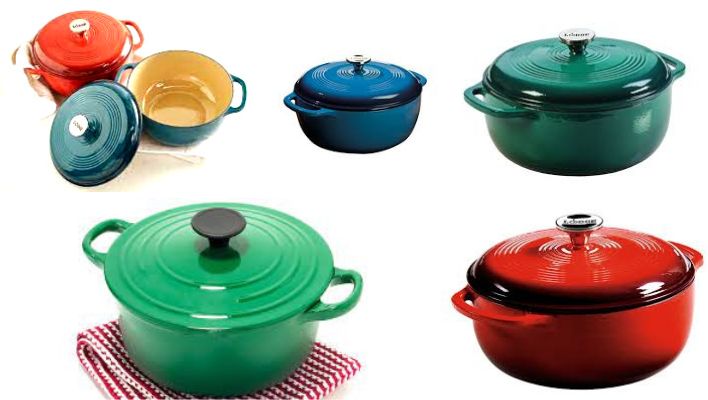 You’ve heard it over and over again: preheating your cast iron dutch oven is essential for getting the most out of your cookware.

After all, this is the piece of gear you’ll be using the most, right? If you’re anything like us, you might have started to wonder if this age-old advice is actually true. Can you preheat an enameled cast iron dutch oven?

Well… yes and no. Yes, in that preheating isn’t necessarily a terrible idea — especially if you live in a cooler part of the country where the outside temperature poses a real threat to your food. But no, in that preheating will not necessarily do much for seasoning your pan. Keep reading to find out more about this common yet controversial topic.

The idea here is to remove any residual chill in the pan so that you can sear your food more evenly. Heating the pan up to 450°F (230°C) for around 5 minutes should do the trick. If you’re preheating enameled cast iron, you’ll probably want to increase the temperature to around 500°F (260°C).

If you’re preheating your cast iron dutch oven, it goes without saying that you shouldn’t leave it unattended. You don’t want any part of the pan to stick or get too hot, as this can lead to damage, especially if you have an enameled cast iron pan. Besides, you’ll want to use your cast iron dutch oven to its full potential, not damage it trying to get it to work harder than it can.

Can You Preheat an Enameled Cast Iron Dutch Oven?

However, we’d recommend taking this particular piece of advice with a grain of salt. Certainly, preheating is a good idea and can help to slightly season your new food preserver, but it is by no means a requirement for using it. If you’re preheating your dutch oven and then using it immediately, you will likely find that it is a bit too hot for your tastes.

This is especially true if you preheat it at a low temperature (like 425°F / 220°C) and then immediately try to use it in the middle of summer. You’ll likely end up with a burnt exterior, but an inconsistent interior. This is why we recommend using your dutch oven gradually and gradually seasoning it with bits and pieces of your food.

Why is it Useful to Preheat Your Dutch Oven?

Now that we’ve discussed what preheating your cast iron dutch oven is and why we recommend it, let’s talk a bit about why it’s useful to preheat your new dutch oven in the first place.

As we mentioned above, preheating your cast iron can help to slightly season your new piece of cookware. While preheating won’t necessarily give you a more seasoned pan, it can reduce the risk of damaging your cast iron dutch oven if it is too hot when you try to use it.

Preheating can also help to ensure that your cast iron pan heats up evenly. If you try to preheat your dutch oven to 500°F (260°C) for an hour or so, it is likely that the sides of the pan will get hotter than the bottom. Don’t worry about this too much, though, as you can use a cast iron spatula to transfer food from the sides of your pan back into the center.

Preheating your dutch oven will also help to shrink the size of any food that is stuck on the sides of the pan — this is especially true with sticky sauces like a sticky reduction.

How to Preheat an Enameled Cast Iron Dutch Oven

If you’re using your new dutch oven on the grill, you can skip this step. Next, heat your cast iron pan over medium-high heat until it reaches around 450°F (230°C). Be sure not to overheat your enameled cast iron, as this could damage it.

Once your pan is preheated, reduce the heat to medium and use it as you would any other pot.

As we discussed above, preheating your cast iron dutch oven is fine if you don’t try to use it right away. However, we do recommend that you keep your new pan as warm as possible while you use it.

Preheating on the stovetop is likely to be safer than using your preheated dutch oven on the grill. If you’re heating your cast iron on the stovetop, be sure that it is far enough away from any open flame or heat source so that it doesn’t pick up too much heat.

Cast iron is a great conductor of heat, so it is best to keep it away from any other type of heat source. If you have an oven or a gas burner that is in use, use this as a place to put your cast iron dutch oven for a few minutes.

Final Words: Should You Preheat or Not?

Unfortunately, this is by no means a guarantee — you could be using your dutch oven for a long time and never have it get any real pre-seasoning from use. If you don’t preheat your enameled cast iron dutch oven, you’ll get the same great cooking results with a minimal amount of effort.

Preheating will, however, ensure that your new piece of cookware gets a bit of extra seasoning from the heat. So, if you are a fan of preheating, you’ll want to give it a go. But, if you’d rather not risk damaging your cast iron dutch oven, we’d recommend skipping it.

Q:  How do I clean my enameled cast iron dutch oven?

A: Cleaning your enameled cast iron dutch oven is easy. Just use hot water and good soap, like Dawn dish soap. If you have stuck on food, don’t use so much that it is more than a thin layer of soap. Let the dutch oven soak for at least an hour, then scrub with a plastic scouring pad or sponge and rinse with hot water.

A: I’ve heard that you need to seal your cast iron before using it. Should I seal my enameled cast iron dutch oven?

Are Wusthof Knives 15 Or 20 Degrees

My Mak vs. Your Yoder: Which One is Better?