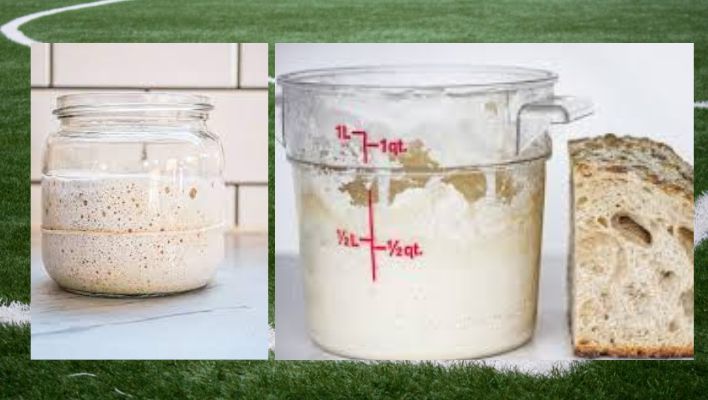 Souring is one of the techniques used in fermentation to create acetic acid, which gives bread its characteristic sour taste. It’s also known as sourdough starter splitting or creating two batches of starter.

You can split your sourdough starter by taking a portion for future use and feeding it to the remaining portion once the new batch has been fed in order to keep both active cultures going. Souring is also used in other fermented foods such as yogurt, beer and wine.

Sourdough is made from flour and water that’s allowed to ferment with bacteria called lactobacilli or bacillus which brings carbon dioxide into the dough and creates acids. In order for this process to work optimally, you need a sufficient amount of yeast so that the dough can rise after being soured.

However, if you keep adding more yeast your sourdough will get overpopulated with yeast which could result in it spreading out too quickly making it difficult for it to re-populate when more flour and water are added again.

So what happens when your sourdough gets overpopulated? Well, instead of throwing out all that excess yeast you might have (which is not recommended as it reduces the number of good organisms left), why not split your sourdough in half so each remains healthy?

This way you can still enjoy using both portions without having an over abundance of yeast or having a low population on hand for future usage.

There are two ways to make a sourdough starter. One is to sour flour and water by allowing some of the flour to begin to ferment with yeast and bacteria. The other method is to begin with flour and water and allow it to ferment in a container until it begins to bubble and smell sour.

When you mix the flour and water you’ll want to make sure the water is warm to activate the yeast and bacteria in the flour. Keep in mind that sourdough starters are meant to be kept in a cool place, so follow your region’s temperature guidelines.

Split your sourdough and keep the best part

A sourdough starter can be split by taking a portion for future use and feeding it to the remaining portion once the new batch has been fed in order to keep both active cultures going.

What you do is take a small portion of your current starter, feed it with flour and water, and place it in a mason jar or other container. That’s it. Once you create a new batch of starter by feeding your previous batch, you can gently stir the new portion of starter to incorporate any flour left behind in the container.

You can do this as often as you’d like until you’ve got a nice, thick sourdough culture. You can also choose to use a special starter container that allows you to split your starter.

These containers are typically made from glass and have a flexible wire that allows you to easily separate them. If you want to splurge, you can even buy a splitter that comes with a recipe book!

Feed the new starter with fresh flour and water

Once you’ve got your sourdough going, you can start feeding it with fresh flour and water. This will help it grow stronger.

For every cup of flour you use, you’ll need 1 cup of water. You can feed your sourdough starter with a spoon or a siphon, which is similar to an Irish coffee maker.

If you use a siphon, make sure the water level is below the starter’s level so that it doesn’t splash out.

Once your starter has been fed, it’ll have a great deal of volume, so you can store it in mason jars or other airtight containers. Keep both sourdough starters and use as needed. As long as you keep both starters alive, you can easily create new batches of sourdough by feeding them with fresh flour and water.

How long to keep your sourdough starters?

Like many other foods, sourdough can be kept for a long time. In fact, sourdough can last for years if it’s stored properly. That being said, sourdough is not meant to last for ever, and it’ll only last for about three to six months.

After this, it’ll begin to taste sour and not taste very good. The best way to determine when your sourdough is ready for use is to smell it.

You can also take the time to scrape down your sourdough before splitting it, as this will help it to re-populate faster.

Why use sourdough when you can use yeast?

Most people use yeast in their baked goods as it creates a much quicker rise in the oven.

However, sourdough can take longer as it requires rising multiple times. Sourdough can also create a much tastier and healthier product than yeast. When you use yeast in your baked goods, it feeds off of the sugar in flour which is why you need to add more flour after the initial rising.

That being said, you don’t need to add as much flour to sourdough because you’re using bacteria and yeast rather than sugar to create carbon dioxide. Sourdough also creates a much tastier product as fermentation creates natural flavours. Yeast can also produce off-flavours and give off a foul smell. Sourdough creates a naturally sweet and sour product.

Sourdough starter is a cost effective way to make your own bread. It’s not as expensive as yeast, and it can easily be stored in mason jars or other airtight containers. Sourdough starter is easy to bring to work or school for use in other people’s dishes.

Sourdough starter can be easily mixed with a variety of ingredients such as grains and legumes, and it doesn’t need much rising time at all.  Sourdough starter is easy to use, inexpensive, and readily available. You don’t have to purchase any special ingredients or spend money on yeast.